Updated – The day Oasis randomly dropped copies of their most sought after album for sale…at the original RRP.

So a few months back I wrote about the random day that the Oasis store decided to drop 20 years worth of back catalogue out of the blue. (Scroll down if you’ve not read it)

The drop consisted of First edition records that had been out of stock for years across the majority of the Big Brother catalogue.

At the time of writing, I thought that that was it, but it turns out it wasn’t. I was recently contacted via this site anonymously by someone who had read this very blog and decided to check the oasisnet store for themselves. I’ll let them tell the tale as it was sent to me.

Hey, I read your article about the Oasis drop and thought you’d like to hear my tale. I checked their site wondering if anything would be left knowing there probably wouldn’t be. But, on there was the Heathen Chemistry LP, listed as the 2009 version for just £25.

I took a punt on a copy knowing it was more likely to be the 2016 repress than the super heavy weight 2009 press.

So I thought I’d by a couple more, I ordered 3 more. And then before they arrived I got giddy and ordered another 6.

The first three arrived. And this time I got 1 of each

Thinking it was over I tried to cancel my second order of 5 but it had already been dispatched. So I expected 5 more 2016 copies.
What came was 4 more 2002 First press and a second 2009 Promo.

Being the greedy sod I am, I bought another 7 (I couldn’t add anymore to my basket as they’ve sold out) and another 7 mint first press 2002 copies of Heathen Chemistry arrived and here is the proof,

thanks for the blog, you’re gonna make me a nice stack of dosh 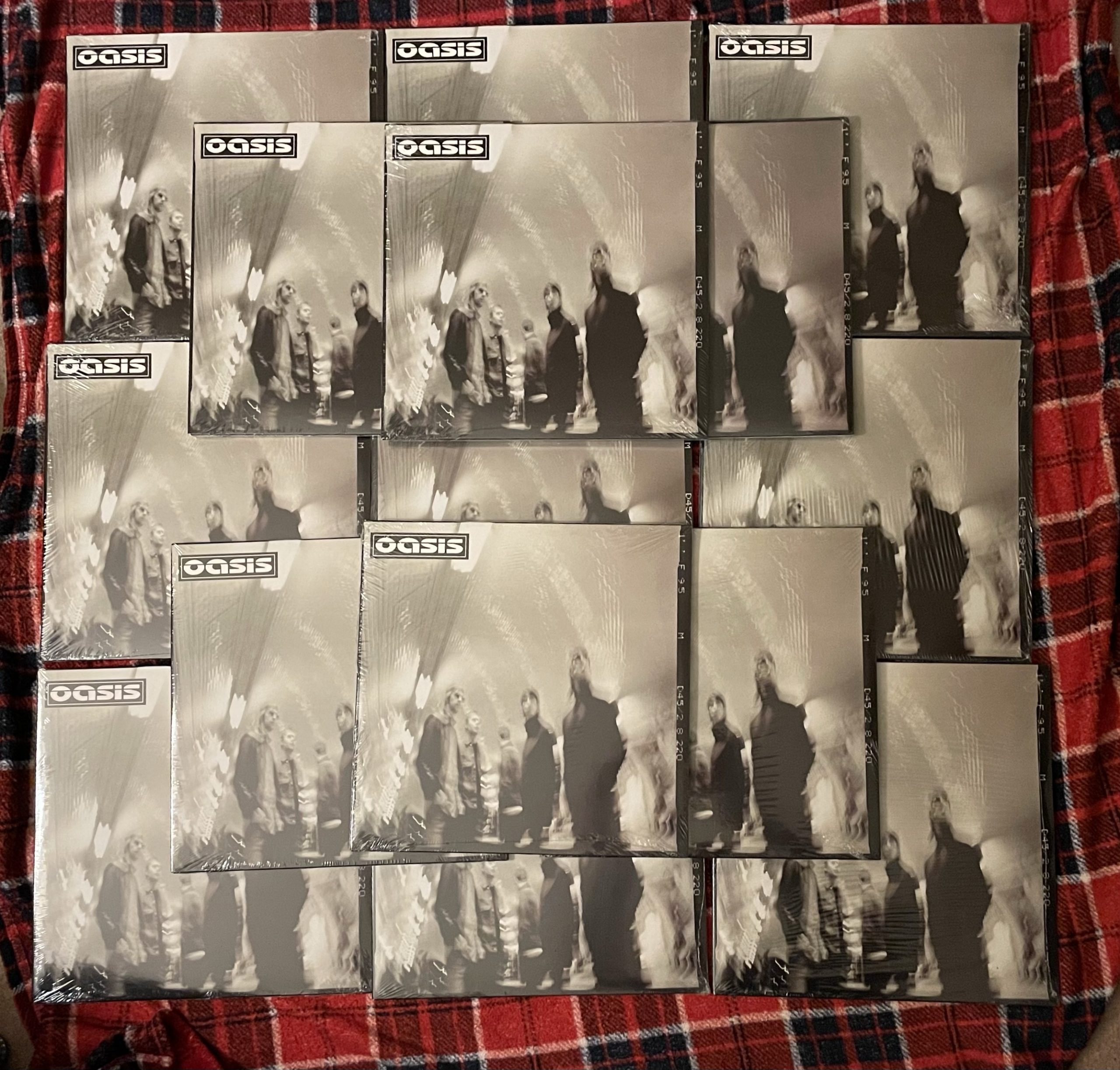 As this was an anonymous post I can verify any of it, though that is a picture of 15 records which do all look like the first press issue.

Am I gutted I missed out again? Hell yeah but hopefully this person who bought 15 can at least send me 1 as a thank you?

See below for the original blog!

The Dream We All Dream

For many record collectors (this one included) there’s a dream, a fantasy, a ‘never going to happen but imagine if it did’ scenario we all like to torture ourselves with. It goes something like this:
‘How cool would it be if Artist XYZ’s staff/distribution team found an old box of Album X or Single Y in the back of the store room? And then they put them on sale at the standard price, not the currently riculously inflated eBay/Discogs price, but the original RRP. How cool would that be?’
Well, on Friday the 30 July, 2021, around 11am GMT, something similar happened.
Nearly 21 years after its original release, an email dropped in to the inbox of Oasis subscribers, advertising the availability (albeit extremely limited) of their ‘holy grail’ LP, Familiar to Millions AND for the original rrp of just £25…yep, you read that correctly. £25.
To put that figure in to context, the lowest for sale price (at time of writing, Aug 21) on Discogs is £420, that’s the lowest price, eBay at present is nearly double that (click here for latest offerings on eBay)

On Friday 30 July, an email was received by myself at 10.58, the below email, the email that you dream of… 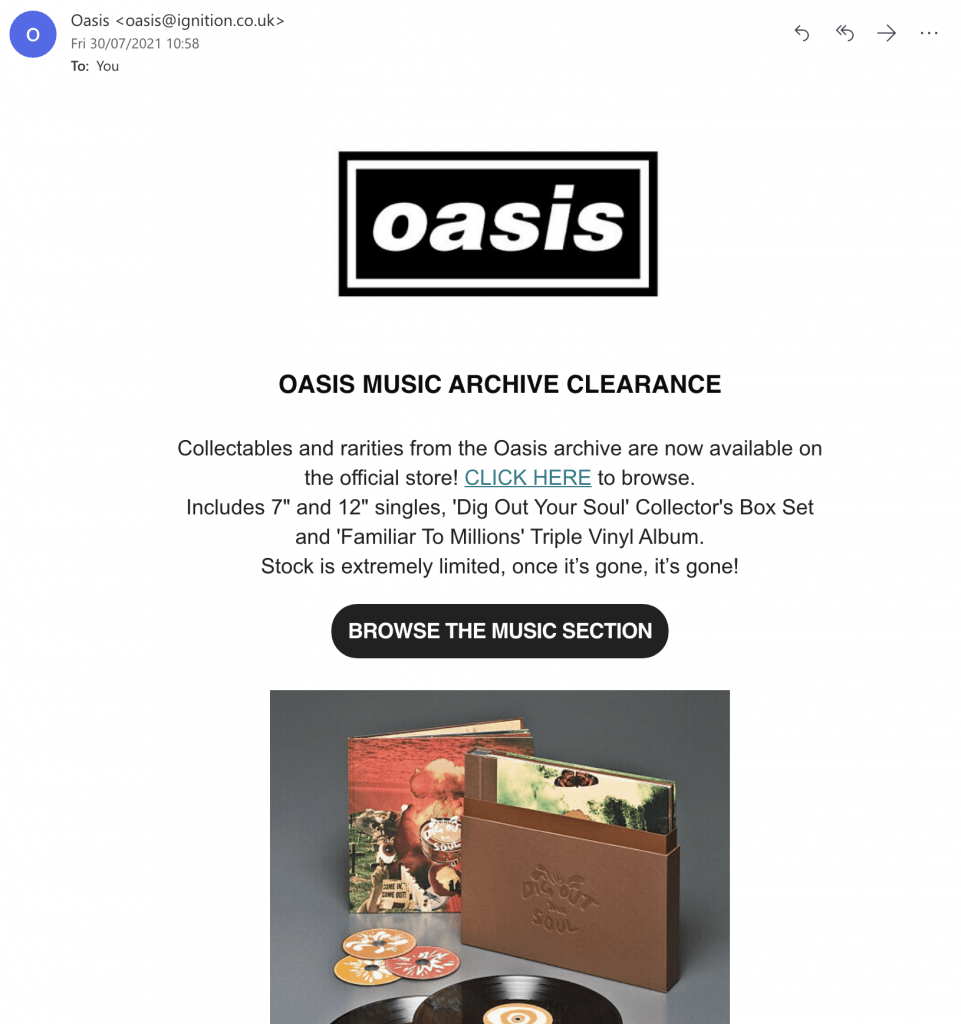 Unfortunately for this vinyl lover, I didn’t see the email until 20 minutes later and by the time I scrambled on, the only vinyl left was:
Whatever – 12inch 2014 Definitely Maybe Box Set Exclusive
Some might Say – 12 inch 2015 What’s The Story Box Set Exclusive

What else was available?

According to social sites, apart from Familiar To Millions, there was also available: 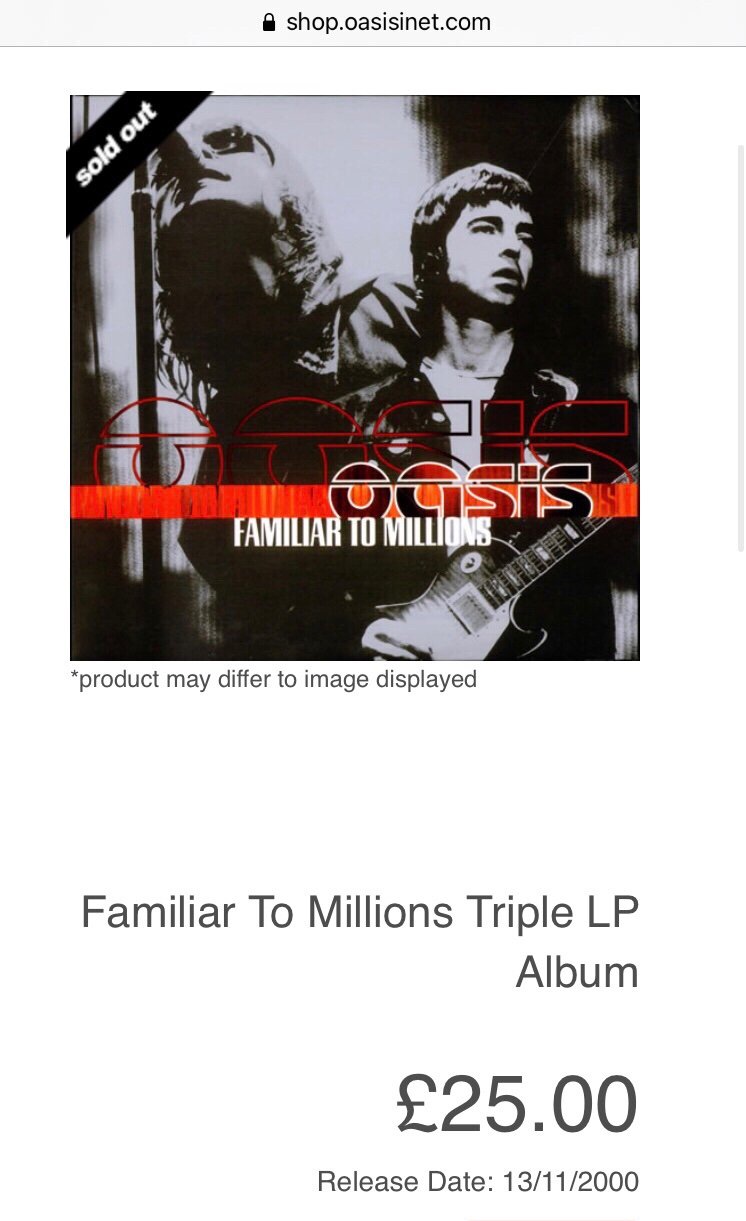 Yep, this was briefly for sale for just £25 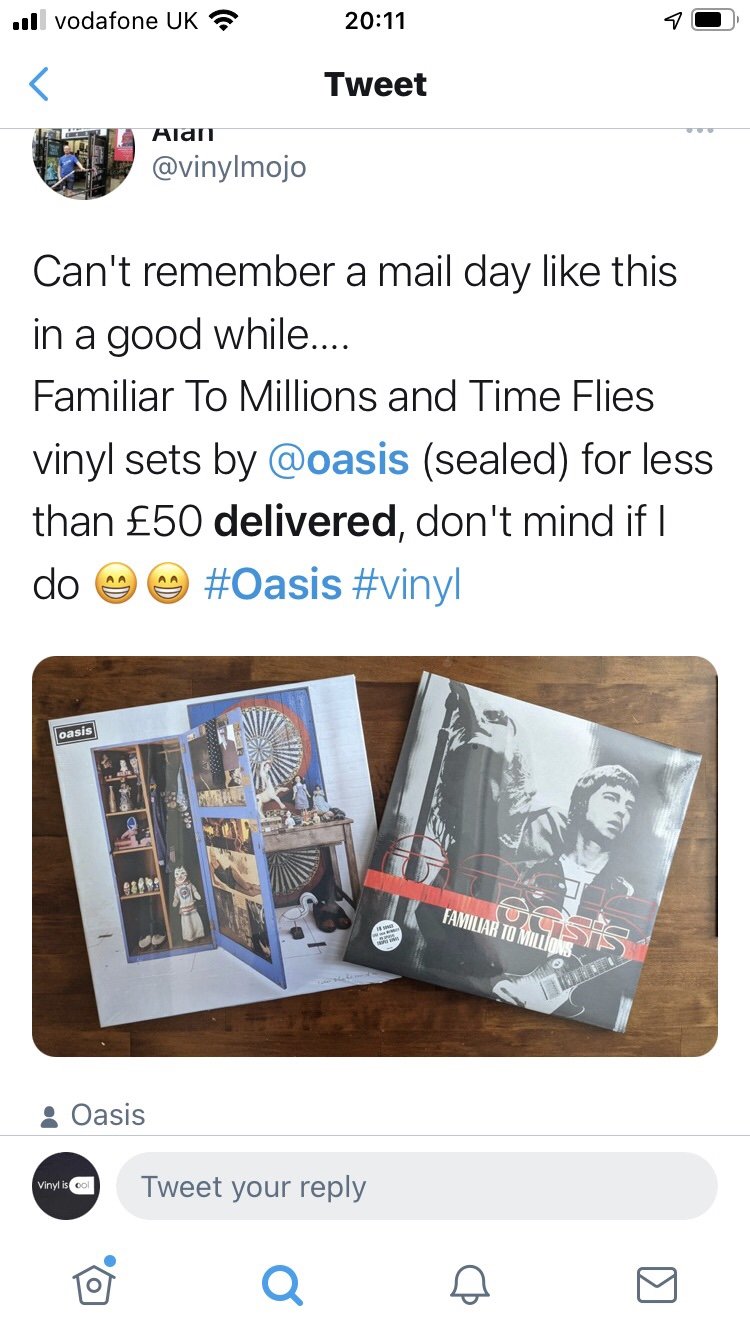 A lucky buyer on Twitter showing off their purchases

These are just the ones that I can confirm through social media posts.

So, in summary…don’t be too quick to unsubscribe from those email lists, you never know what may become available!